Guest post: which roofs are (and aren’t) suitable for solar panels?

Home » Blog » Guest post: which roofs are (and aren’t) suitable for solar panels?

In the first of our ‘Guest Post Series’, George from Spirit Energy tells us about the roofs that are (and aren’t) suitable for solar panels.

Opting for solar panels on your property is one of the best things you can do for the climate, your energy bills and your energy efficiency rating. The ideal place to put a photovoltaic system is on the rooftop, as it’s generally the spot most exposed to the sun and would otherwise be unused space. But which types of roof are suitable for solar panels?

The first step is to make sure you own your roof. Assuming that’s the case, let’s run through each variety, as well as other factors to consider.

What type of roof do you have?

The most common solar installations are on sloping tiled roofs. There are three ways of doing this: attaching the panels on brackets above the tiles, removing a section of tiles to install panels ‘in roof’, or roofing directly with solar tiles. Most tiled roofs suit these methods (though anything in roof is generally only done during refurbishment or a new build), but rosemary and slate tiles are more expensive than concrete due to increased likelihood of breaking.

Solar can also be installed on asphalt shingle roofs with standard mounting systems.

Metal roofs are very straightforward to install on when they have standing seams, onto which you can clamp the panel frames, without the need to drill into the roof. Corrugated roofs can also be installed on using non-penetrative racking similar to seam clamps, which is usually the quickest and most cost effective method. As one of the most durable roofing materials, metal roofs will typically last longer than the lifespan of the solar system, saving the need for complex future renovation.

You can have solar panels on a flat roof, but they need a specialist mounting system to raise them to a suitable angle and provide ballast. Designing the system also requires a compromise between packing the available space and leaving room for shading between rows of modules. Note that domestic flat roofs will nearly always require planning permission, while commercial roofs are generally fine.

Perhaps surprisingly, green roofs are actually well suited for PV – together they make up a biosolar roof. The solar panels do need to be installed at the same time as the green roof, however, since the mount is fitted underneath the growing medium to weigh it down. On the plus side, the transpiring vegetation keeps the panels well ventilated.

Thatched roofs are not suitable for solar panels. There’s no mounting system designed for thatch, which wouldn’t be ventilated well enough underneath the panels and so would rot. And given that thatched roofs already present a fire risk, putting an electrical system on top wouldn’t be sensible!

Installing solar panels on an asbestos roof is a lot trickier than any other type – many installers won’t want to touch those projects with a bargepole – but it’s not impossible. Rafters are fitted over the roof to support the solar modules, without disturbing the asbestos cement.

While most solar projects don’t need planning permission, if you live in a listed building or conservation area then you will have to make a planning application. Integrated panels or solar tiles may be more likely to be accepted.

Other factors to consider for your solar panel installation

In the UK, the best orientation for solar is south to face the sun at its highest point. If you don’t have a south-facing roof, south-to-east or south-to-west directions can still generate a decent amount of electricity. Anything north-facing is not suitable, however, as it simply won’t get enough sunlight to justify the expense.

The best angle for solar PV in the UK is 35-40 degrees to the horizontal, but any roof with a pitch outside that range will only see a small drop off in generation. On flat roofs, panels are installed at a 10 degree angle to maximise the use of space and shading.

Shade is the enemy of solar power, so a fully shaded roof is a no-go. Check your roof to see the impact of shading from things like trees, chimney stacks and neighbouring buildings throughout the day. Partial shading on the roof’s surface can be dealt with via careful placement and power optimisers.

George is the Marketing Manager at Spirit Energy, an award-winning solar installation company. Passionate about a green future, he writes on many aspects around the transition to renewable, independent energy. If you would like to feature on our ‘Guest Post Series’ please email us at andrew@buildpass.co.uk 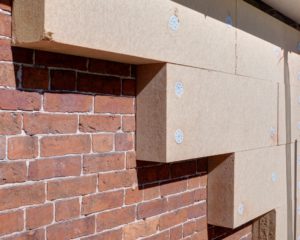